Painter Terry Hitt works in Dayton’s most colorful building, the K12/TEJAS building at 341 South Jefferson Street.  The first time I met Terry he told me how much he enjoyed working there because “it’s filled with so much good energy and artists of all ages to talk to.”  The melted snow and bright afternoon sun gave me an interesting view of the building as I approached.

Walking by some art classes filled with school age children, I came to Terry’s studio on the first floor at the front of the building.  To the right is an area where artist Ann Ruef works.  Artists Lisa Dineen and Ashley Sheridan are nearby.

When I visited, some of Terry’s work was being displayed in the building’s gallery, along with work by some of the building’s other artists.  This piece, called Fiddler on the Roots, shows Terry’s father.  It was painted after his father could no longer play the instrument.  But he remembered how to hold the violin,  and could pose for this work.   The bottom of the painting, beneath his father’s feet, shows the Hitt family’s roots – the area in Europe they left in 1714.  Ghostly images to the right and left of the fiddlers head show Terry’s father as a younger man and the face of the first Hitt family member to come to America, flanked by skulls.

“We do our dance and then move on,” Terry explained.  “One day I will be gone and someone else will use my studio space.”

Another very different piece of Terry’s in the exhibition shows a scene from Glen Helen Wildlife Preserve.  “I added texture with native grasses glued to the surface and then raked off and painted over. The inhibiting texture keeps me focused on the larger forms rather than realistic detail. However the end result is the illusion of detail.”

Terry walked me through some of the symbolism in this  multi panel work, titled T Rex Mall Ex.  It shows some of the history of encroachment over our local landscape. From Sun Watch to Mall development each new incursion displaces the past. The nest in the piece was actually taken from the eaves of the pictured house, which was demolished to make way for a mall.  Terry said he plans to donate this artwork to SunWatch.

The painting below is part of a series Terry has been working on.

“I’ve been thinking more about mortality as I get older, and I’ve been fascinated by what we’ve been learning from the Hubble Space Telescope about how galaxies collide and change into something new.  That is, galaxies have a life cycle.   Flowers are so beautiful, but we all see them as ephemeral.  Galaxies are also beautiful, and we think of them as everlasting.  But now we know that galaxies are also ephemeral but on a different timeline.  The idea that everything is constantly changing and being sort of repurposed fascinates me, and that’s what I’m trying to convey with these paintings.”

If Terry sounds like a philosopher as he discusses his work, that should come as no surprise.  He’s the only artist I have met who has both an MFA degree (from the University of Cincinnati) and a Masters of Divinity (from United Theological Seminary).   He was once a United Methodist pastor before becoming an art professor at the University of Dayton.   In 1997 he retired from teaching but not from painting.  Now in his 80’s, he still works in his studio most days.

Terry doesn’t see moving from organized religion to art as a big step.  “Since I view art as exploring the meaning of being human and since the meaning of life is central to religion, I think all artists are theologians in spite of themselves.”

One of the reasons that I wanted to spend some time with Terry was to learn more about a project he did when he taught at the University of Dayton.  Terry – first alone and later with some of his drawing students – did a series of drawings of Dayton’s homeless people.  They eventually had an exhibition at the Lazarus Art Gallery titled “Portraits of Homelessness” that helped create a recognition of the extent of the homeless problem in Dayton.

Terry said there was a lot of publicity when he was working on that project, and that he must have appeared on TV a dozen times.  Online, I found articles about the project from as far away as the New York Times.

But I really learned about the project, and about Terry, as he showed me some reproductions of the work.  Terry didn’t just do a drawing and move on.  He got to know these people.  He could tell me their names, their history, and in some cases what happened as he tried to help them. 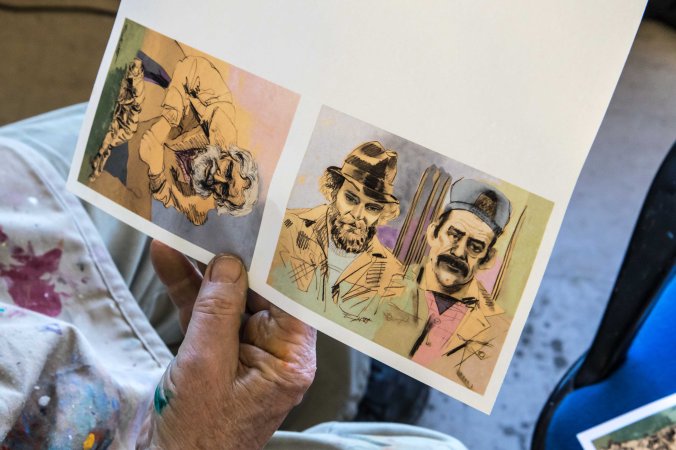 Are you painting in oil?

“I am now.  Usually I start off in acrylic because it is cheaper and faster.  Then I switch to oils to finish the work so I can build up some impasto texture.  There are acrylics that give texture but acrylics dry darker than when they are wet.  Oils pretty much stay the same color as they dry so you can get close harmonies of value.   There is a minor risk that there could be delamination between the acrylic and the oil but I usually put Soluvar varnish between the layers and I have never had a delamination problem.” 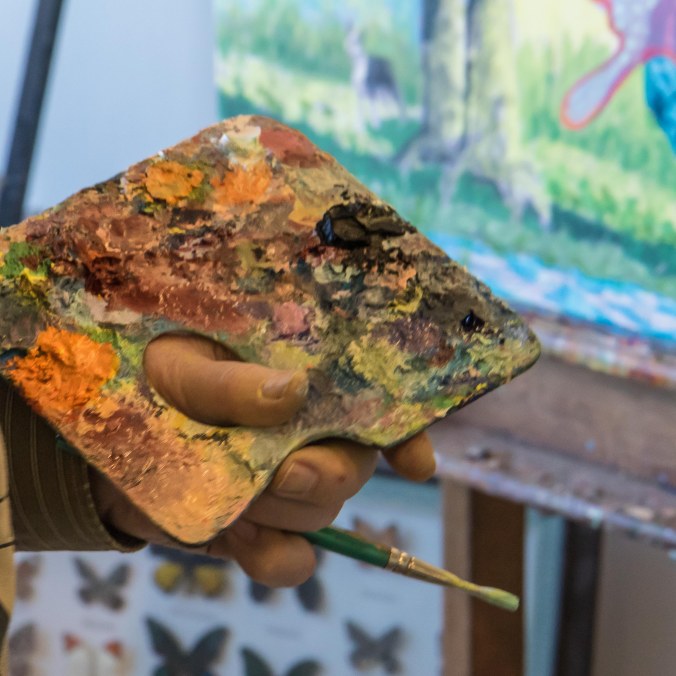 As I got ready to leave Terry turned on his music.  “I generally listen to classical, but when I’m feeling rambunctious I will switch to jazz.  But sometimes, when I’m stuck, I need to shut the music off and just concentrate on the painting.” 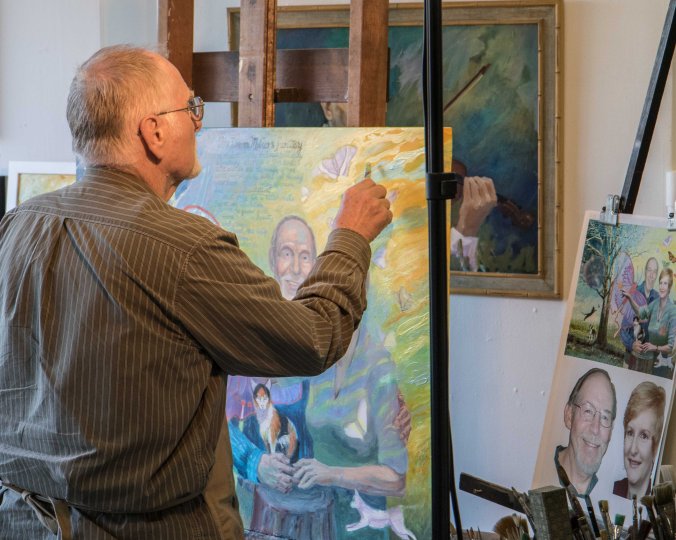