Mike’s studio is always a busy place.  The last time I visited, Mike had 3 employees working on some of the initial steps in creating his art.  As I was taking photos, the property manager also stopped by. 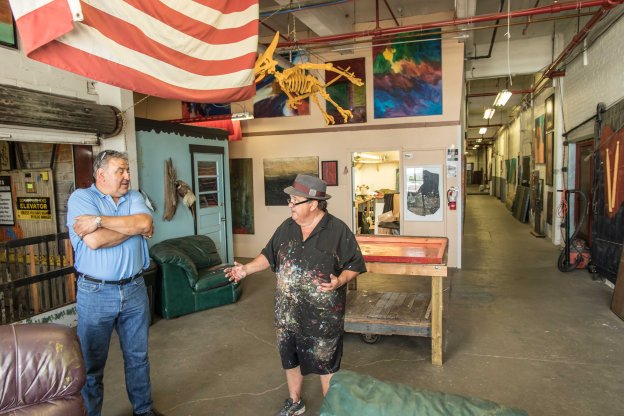 Mike’s process starts with sheets of steel – some already rusted and some rusted in the studio.  Next he may add other materials that create even more texture.  Finally he applies as many as 40 layers of acrylic paints to create the final work.

Mike started making art after selling his successful insurance business.  He is mostly self taught but Roger Sayre was an early mentor.  Sayre, a nationally known artist, showed Mike one way of painting acrylic on steel and encouraged him to experiment with other approaches.

Mike feels he owes much to Roger Sayre, but says their painting styles are quite different.  “Roger would agonize over every step in creating one of his pieces.  He might sit back and stare at the work for an hour before picking up a brush and applying paint for a minute.  I am at the other extreme.  I try not to over think it.  I paint quickly and try to capture what I am experiencing at a particular moment in time.” 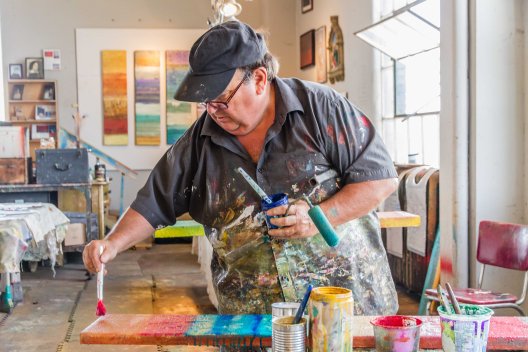 Mike has been a successful artist for some time.  His work is in more than 2,000 private collections and has been featured in national magazines.  I asked Mike how his work today was different than his work 5 or 10 years ago.

“I am constantly experimenting with new materials,  Recently, for example, I have tried  mixing oil with my final layer of acrylic paint.  The mixture of oil and water beads up in an interesting way.”

“I have also been developing new ways of presenting the work.  With my new J-rail hanging system I can hang five, ten or even twenty sheets of painted steel to create an interesting pattern and size.” 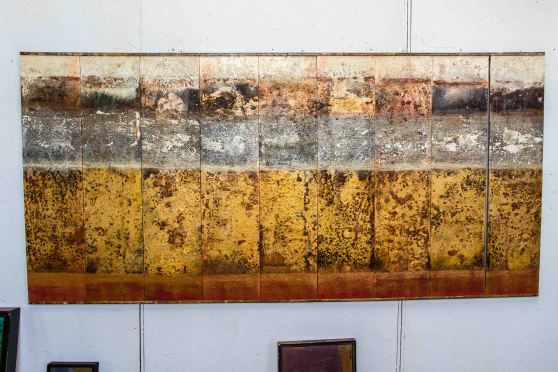 During one of my visits to Mike’s studio he was setting up for a class.  In these classes each participant gets to take home one or more “masterpieces” created during the session. 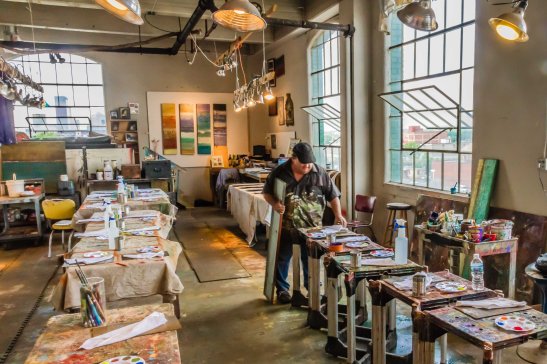 Mike’s gallery space is beautiful, and he’s generous with letting other artists and local organizations use it.

Generosity seems to be one of Mike’s primary traits.  Within five minutes of meeting me, he was looking for ways to help me in my photography career.  Local nonprofits benefit greatly from Mike’s generosity.  The art and the art workshops that he’s donated raised more than $50,000 over the last 18 months. 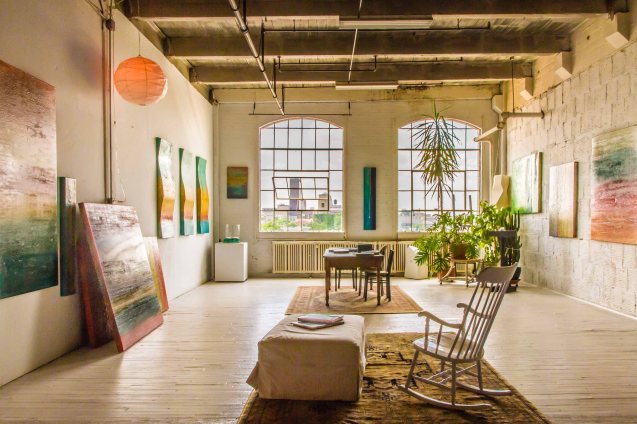 Mike’s Front Street studio and gallery are so interesting that I couldn’t stop taking photos.  I will close with a few of those photos and a portrait of Mike in front of one of his paintings. 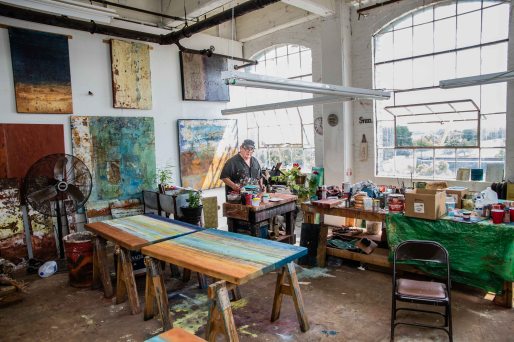 One thought on “Mike Elsass – Abstract painting on rusted steel”