Bridgette Bogle was born in Roswell, New Mexico – site of the famous alien UFO landings.  Leaving Roswell, Bridgette studied art in Texas, Glasgow and Rome before coming to Ohio State.  She now lives in Dayton and is a full time teacher in the Painting and Drawing area at Sinclair College.

For the last eight years, Bridgette has shared this beautiful house with her husband and fellow artist Francis Schanberger. 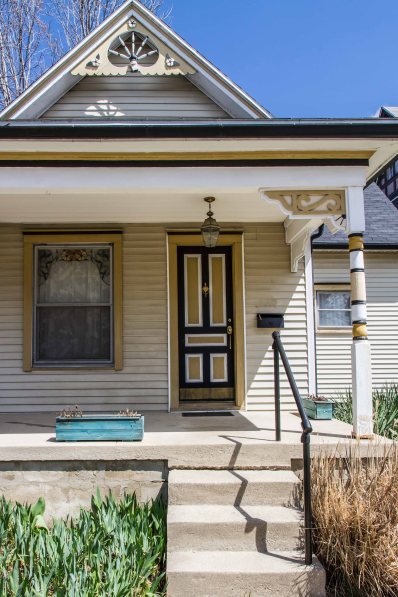 The front entrance to Bridgette’s home was inviting, but I entered through the back door.

The reason for using the back entrance became clear as I entered the house and smelled varnish.  The wood floor in the house’s entranceway was being refinished.  The purpose of the short fence is to keep Bridgette’s cat (who chose not to be photographed) off of the wet varnish.

Bridgette’s studio is in a room between the main living area of the house and the kitchen.  I asked Bridgette how this particular work space impacted her art.

“This studio space has been great for me.  Most people have studios that are clearly separated from their living space.  My studio is in the middle of my living space.  And the ceiling is very high, so there is plenty of room to hang my works-in-process and to work on a larger scale.

Even when I am not working, I am walking by my unfinished pieces and thinking about how I would like to finish them”

The more I thought about Bridgette’s work approach, the more I liked it.  It’s as if she started with a studio, and then added a kitchen, living room and bedroom around it – so she wouldn’t need to leave,

I asked Bridgette about a piece with a large hole in the middle.  “I found this in the studio of my friend Michele BonDurant.  She had used it as a support for stretching canvas but it’s slightly warped and she was considering getting rid of it.  I loved the way it looked so she let me bring it home.  A lot of my recent work has involved reusing my older pieces, but this is the first time I’ve used someone else’s.”

As she talked, Bridgette put the piece on her studio wall.

Bridgette worked on this piece as we talked.  By the time she went back to her painting, it was starting to look finished.  The work on the left is also repurposed.  Bridgette did some painting over an old piece, cut the hole, and added a strip of cloth to hold the “window” open.  She is still working on it, so I will need to check her website in a month or so to see how it turned out.

I noticed some blue ribbons on the door frame that Francis had won in photography contests.  Not to be outdone, Bridgette created her own ribbon and put it at the top. 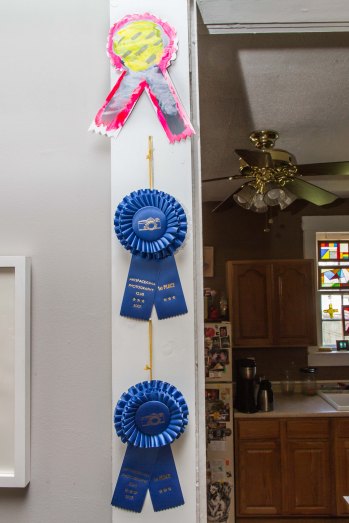 Bridgette returned to her painting and talked to me about the time she and her husband had a joint art exhibition. 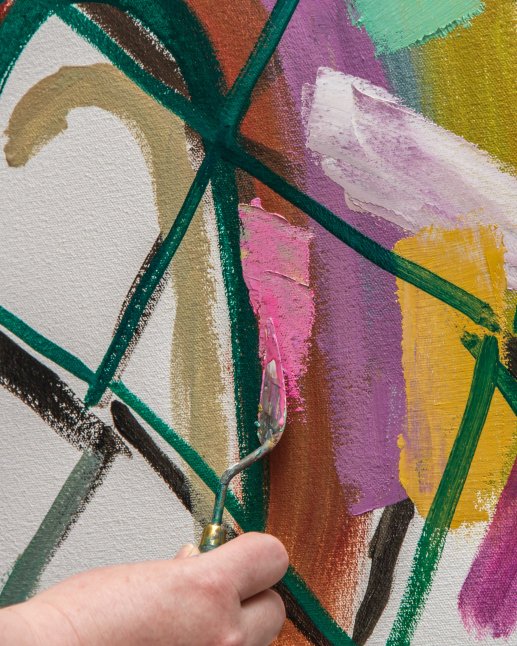 “We called the show “Your Turn.”  Francis would create a photograph, and then I would do a work that began with that same composition.  I was amazed at how well it worked.  Composition is a strength of Francis, and my paintings just flowed.  He also would take one of my paintings as a starting point, like the one I did that was inspired by a Sam Francis painting at the DAI.  We really enjoyed bouncing off of each other’s ideas.”

As we talked and Bridgette worked I noticed her “brush pig” sitting on the table. 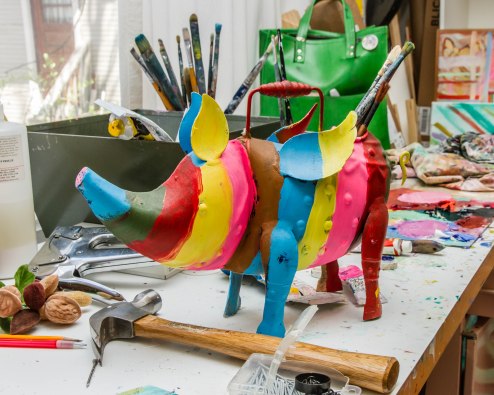 Having someone with her while she painted was a new experience for Bridgette.  Usually it’s just her and some music, and sometimes she doesn’t even play the music so she can listen to the painting.

But eventually she got into a rhythm.  She’d paint a bit and step back and think a bit then paint some more. 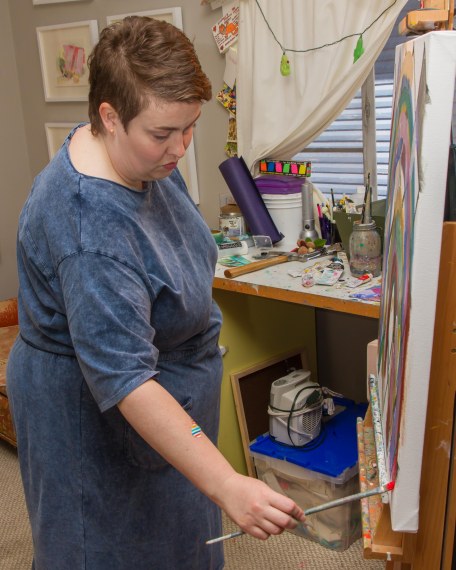 Finally, she stepped back, thought for a while, and said it was time for the painting to rest.  I decided that was also time for me to leave. 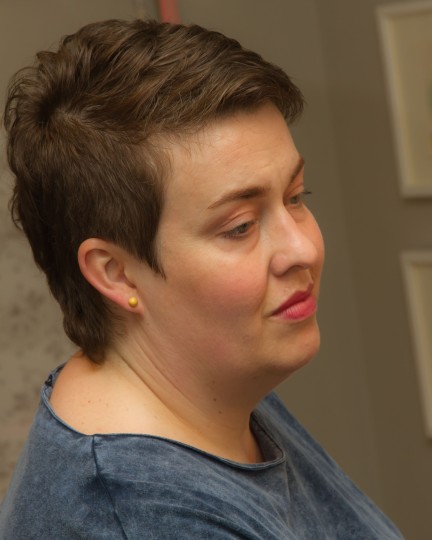